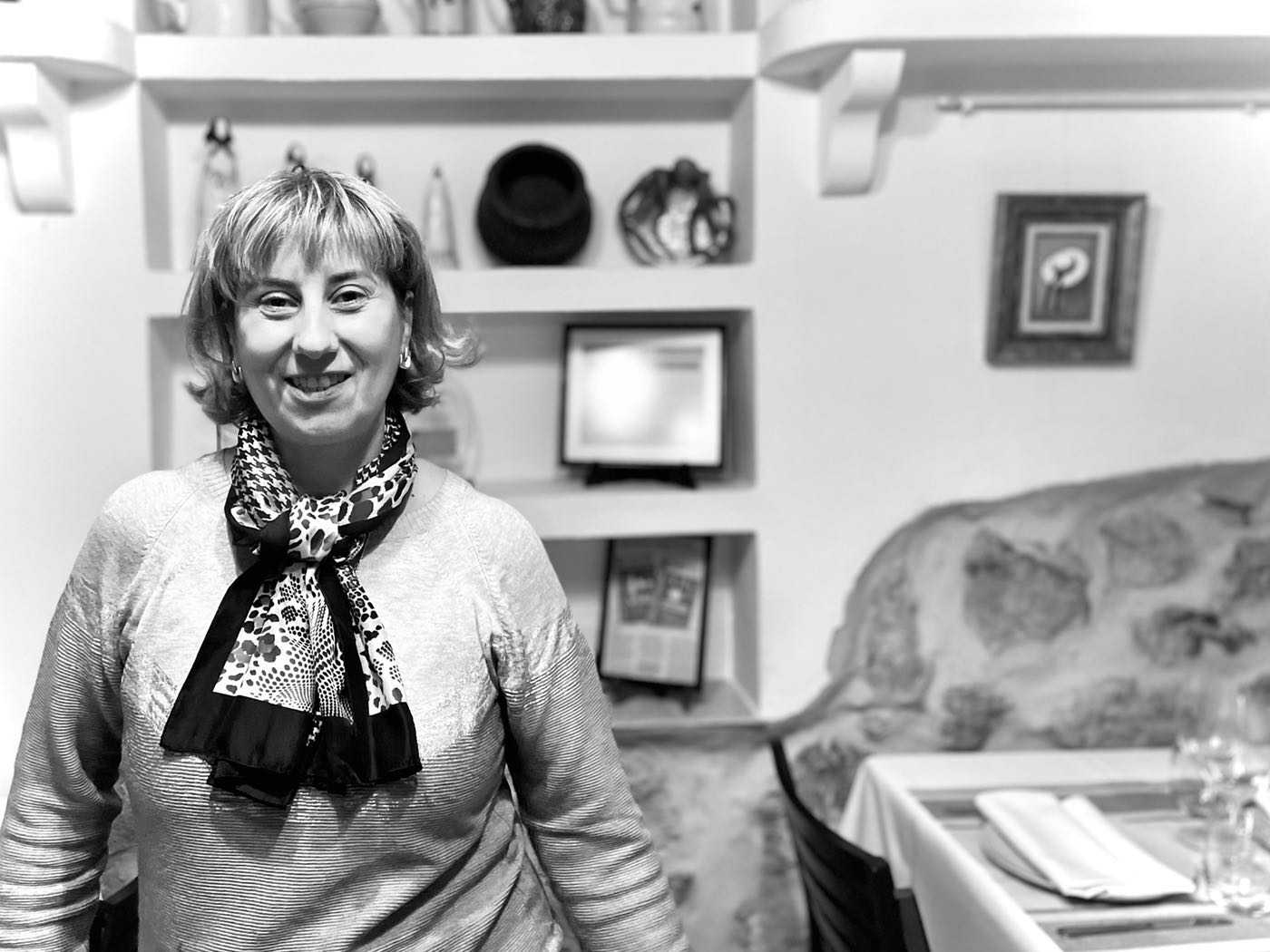 Cati Marí: "My mother worked in the kitchen of Es Rebost for many years which was key to our keeping to tradition"

[Sant Antoni, 1968. Restaurant owner. She is the manager of Es Rebost de Can Prats, a benchmark in Sant Antoni’s Ibizan cuisine]

This place, which is now a restaurant, was formerly a shop and a house. How do you remember that time?

With fond memories. What is now the storeroom of Es Rebost de Can Prats was one of the first shops in the village. The people came up from the countryside bringing eggs, carob, fruit, vegetables… for sale. My mother was born and brought up here. For the Epiphany, our grandmother bought a present for each of the grandchildren and hid them behind a curtain that was just here [she gestures towards the end of the room]. There was one year when each of the granddaughters received a Rosaura [a doll] and we were so happy. We often came here to eat whatever güela [granny] had made for us.

What was your favourite dish?

She made salted sardines in sauce with peppers and garlic, and they were delicious. I always tell my mother that one day she has to make that recipe.

Did you use to eat all the dishes that we find on the Es Rebost menu?

Yes, but there were dishes for special days, like the sofrit pagès or porcella, which we ate on All Saints’ Day. The arròs and the friteta de matances were also typical dishes during the winter.

Did you slaughter your own pig in this house?

Yes, I suppose that they must have slaughtered the pigs in the shop storeroom and in this part, at the entrance to the restaurant, which was a really big porch in those days, they placed a huge table for mixing the meat and the spices. The doors were always open. Some days you would go and help at another house and then others would come and help you.

How did you get the idea of opening a restaurant?

My parents used to have another restaurant, Es Molí which they ran for twenty-five years. I was a baby when they started up and I must have been running around all day with a dummy in my mouth. I grew up there. When we opened Es Rebost, on 22 December in 1994, Es Molí was still open. They used to hold a lot of events, baptisms and communions and they had a regular clientele, including people from Ibiza-Town who would come to eat. Many of those clients came here later on. Opening Es Rebost was by chance: my mother was bequeathed this house as part of an inheritance, and I had just completed a business studies course in Palma and having arrived back home I thought that I would like to open a restaurant. My mother was a little bit tired of the restaurant business and she wanted to open an antique shop, but my father and I convinced her by telling her we would offer just a few tapas and we would not complicate our lives. We started like that but, little by little, we put together the menu that we have today.

However, the dishes on your menu are perfect for sharing.

A lot of people, especially in summer, like to share because they want to try several things, they ask for an ensalada de crostes, a frita de polp, the Ibizan cheese selection, the bread that we make at Es Rebost, which we serve with sobrasada…

Were you clear from the start that the local produce and traditional recipes would form the basis of your cuisine?

Yes, we wanted to go down that route, but gradually we began to specialise. We realised that this was a popular way to go and at the same time it was good to keep doing some dishes the way we had always done. The sofrit has to have patató, sobrasada, butifarra, small cloves of garlic, lamb and farmyard chicken. My mother spent a lot of time in the kitchen in the early years. This was key to rooting us in tradition. For the last fifteen years, Claudio [Vidal] has been our chef and he is steeped in this style of cooking: he has managed to get it right, even with the most delicate dishes. It is impossible to tell the difference between him and my mother.

Does the Ibizan clientele often tell you that the dish they tasted reminds them of their mother’s or their grandmother’s cooking?

Yes! And above all, with the dishes for the matanzas -or pig slaughter- that I mentioned because there are not many homes now where people still kill a pig, and if you don’t spend that day with the family, you don’t make those recipes anymore, the ones that are typical of that time.

And what about clients who come from outside the island? For a lot of tourists, sitting down to eat or to dine at Es Rebost is to enjoy the very best of our cuisine.

Some people are surprised to find a restaurant like ours in Ibiza. In recent years, a new type of cuisine has developed, and some tourists think that is the only kind of restaurant that they will find. That is why they are happy to try homemade traditional cooking. Not only that, but it is also good to be able to combine it with other things. In Sant Antoni we have some top-quality restaurants of all kinds.

Where do you get the raw materials for your cooking?

In the Mercat Pagés you will find everything you need. Some produce like the patató, you can get all year round, and others like broad beans are seasonal. We also order from some distributors in Sant Antoni who usually have a lot of kilometre zero produce. Almost all the fish comes from S’Algar. One of the good things about our restaurant is that because it is small, we are able to manage without buying in too much food. With four verderols and two galls we can set up a decent blackboard of suggestions that is always good, because you are eating fresh food of the day.

Do you go shopping?

Yes, and I like doing it. Before, when my father was here, he used to take care of it. We also used to get a lot of vegetables from a market garden we have in Es Jondal. My father is from there and my grandmother was in charge of tending the vegetable garden. In summer we had so much produce, with peppers, onions and tomatoes. Then my father took over, but now he is 84 and he no longer sows and plants, but every year we harvest cistellons [Ibizan baskets] full of lemons, quince, figs… that we serve in the restaurant.

If we could find someone to take it over yes. I would be interested but with three children and the restaurant, you can imagine… [she laughs].

Now that the restaurant is approaching thirty years, how do you feel knowing that to some degree you are the standard bearers for popular gastronomy in Sant Antoni?

Very satisfied. For us it continues to be an honour that so many Ibizans bring their friends to Es Rebost from elsewhere so that they can try the local flavours.

Daniel Salas, manager of El Cocinillas, was here this summer to learn about the Sant Antoni KM0 project, and he was fascinated by your cooking.

He came back and ate here several times. He and his partner wanted to try the whole menu. That somebody like him with so much experience of the world, takes an interest in what you have to offer, and connects with what you are doing amounts to huge recognition. We were very happy with his visit.

Which restaurant outside Ibiza would you take your island friends to?

Spanish gastronomy is excellent, wherever you go. Compared with any European country, our cuisine is at another level. We have so much variety and excellent produce. Perhaps we don’t value it as much as we should. Two years ago, I was in Cádiz, and I loved it. For example, I would recommend La Peña del Atún, in Barbate.

And on your day off, if you had to invite someone to eat at another restaurant in Sant Antoni, where would you go?

To eat a rice dish at Es Náutic, that’s always a good choice.

As a restaurant owner, what do you think is the role of gastronomy in Sant Antoni tourism?

Every year more and more tourists come to our municipality because they have heard of restaurants where they want to eat. That makes you think that we’re doing something right.